Aim: To investigate the effect of factor Xa (FXa), thrombin and platelets, under activation or resting conditions, on neutrophil extracellular traps (NETs) formation (NETosis). Materials and Methods: Neutrophils, isolated from apparently healthy volunteers, were challenged with 25-50 nM FXa, 0.2-8 U/mL thrombin, 5-100 μM adenosine diphosphate (ADP), 0.1-0.5 mM arachidonic acid (AA), 5-15 μg/mL collagen, 100 μM protease-activated receptor (PAR)-4 activating peptide, 10-100 μM PAR-2 activating peptide or 25-100 nM phorbol 12-myristate 13-acetate (PMA). Moreover, neutrophils were challenged with platelet-rich plasma (PRP), activated with ADP (at a concentration of either 20 μM, in an aggregometer, or of 50 μM, in situ). Neutrophils were incubated for 3.5 h at 37οC and 5% CO2 and an immunofluorescence protocol followed, in order to stain neutrophils and NETs for myeloperoxidase and DNA. Finally, NETs and neutrophils were microscopically visualized and the percentage of NET-releasing neutrophils of each of the above experimental conditions was evaluated. Results and Conclusion: Among the agonists studied, only PMA and AA, induced robust NETosis, at a threshold concentration of 25 nM and 0.25 mM, respectively. Furthermore, platelets pre-activated with ADP, but not resting platelets induce the formation of NETs, a phenomenon that is also observed when platelets were activated with ADP in situ, in the presence of neutrophils. The present results provide an additional mechanism through which platelets contribute to various pathophysiological conditions in which NETs are implicated, such as inflammation and thrombosis. The whole spectrum of platelet mediators that are implicated in NETosis needs to be further investigated.

Neutrophil extracellular traps (NETs) are threads of decondensed chromatin, which are decorated with numerous proteins and are generated by activated neutrophils.1 The procedure of the formation of NETs is termed as NETosis. Originally, NETs were studied for their anti-microbial properties, since they entrap and possibly kill pathogens, by providing a high local concentration of microbicidal proteases, such as neutrophil elastase and myeloperoxidase (MPO).1 However, later, extended research, has revealed that NETs are also present under sterile inflammatory conditions and they participate in the pathogenesis of multiple diseases, e.g. cancer,2 diabetes mellitus3 and Alzheimer’s disease.4 Importantly, it is established that NETs are heavily involved in atherogenesis, as well as in arterial and venous thrombosis.5

In addition to their central role in the coagulation cascade, coagulation factors Xa (FXa) and thrombin exert cellular effects via protease-activated receptors (PARs),6,7 which are expressed on virtually all cell types. FXa activates PAR-1 and -2, whereas thrombin activates PAR-1, -3 and -4, but not PAR-2.6,7

Platelets play a key role in hemostasis and thrombosis, however they also interact and activate leukocytes, including neutrophils, thus participating in inflammatory responses as well as in atherogenesis.8 The platelet-neutrophil interaction is mediated by P-selectin, expressed on the platelet surface, and P-selectin glycoprotein ligand-1, which is expressed on the surface of neutrophils.8

In the present study, we investigated the effect of FXa and thrombin, as well as platelets, in their resting and activation conditions, on neutrophils activation and NETs production.

Heparinized whole blood was withdrawn from fasting, non-smoking, apparently healthy volunteers, who had not received any anti-platelet and anti-inflammatory drugs for at least two weeks prior to venipuncture. The whole blood was diluted with normal saline, it was carefully overlayed on a Histopaque®-1119 and Ficoll® Paque Plus gradient and then it was centrifuged at 700 × g for 30 min, at room temperature (RT). The polymorphonuclear leukocyte (PMN) zone was aspirated, diluted with 12.5 mM phosphate-buffered saline (PBS) and centrifuged at 200 × g for 10 min, at RT. Finally, the PMN pellet, enriched in neutrophils, was re-suspended with RPMI Media 1640, supplemented with 2% HI human serum.

Platelet-rich plasma (PRP), autologous to the neutrophils, was prepared as previously described.9 Briefly, whole blood was centrifuged at 126 × g for 15 min, at RT. The upper two-thirds of the PRP layer were aspirated and the remaining PRP was further centrifuged at 1500 × g for 20 min, at RT, to obtain platelet-poor plasma (PPP). The number of platelets in the PRP was counted using a hemocytometer and it was adjusted to 2.5 × 105/μL with PPP.

Neutrophils (2 × 105) were added to 24-well plates, in which poly-L-lysine coverslips were pre-placed, and incubated for 1 h at 37οC and 5% CO2, in order to allow the cells to bind to the coverslips.

The effect of coagulation factors and various classic platelet agonists on NETs generation was investigated. We tested FXa (25-50 nM), thrombin (0.2-8 U/mL), ADP (5-100 μM), AA (0.1-0.5 mM), collagen (5-15 μg/mL) and PAR-4 activating peptide (sequence AYPGKF-NH2; 100 μM). In addition, we studied the effect of a selective, PAR-2 activating peptide (sequence SLIGRL-NH2; 10-100 μM) on the formation of NETs, since PAR-2 is expressed on neutrophils.10 PMA, a widely used NET inducer, was used as a positive control for induction of NETosis at a concentration range of 25-100 nM.

In other experiments, PRP was activated with 20 μM ADP at 37οC for 5 min, under 1200 RPM stirring conditions, in a Chrono-Log Model 700 Lumi-Aggregometer (Chrono-Log Corporation, Philadelphia, PA, USA) and the total suspension of the activated PRP was then immediately transferred to neutrophils, at a physiological ratio of 150 × 103 platelets/6 × 103 neutrophils. Alternatively, PRP was added to neutrophils, at the above ratio, and activated in situ with 50 μM ADP.

In all the above experimental conditions, neutrophils were incubated for 3.5 h at 37οC and 5% CO2, to produce NETs. Afterwards, the cells and NETs were fixed and then an immunofluorescence protocol was followed. According to this protocol, neutrophils and NETs were incubated with an anti-MPO primary antibody and the goat anti-rabbit IgG (H+L) secondary antibody, Alexa Fluor® 488, for MPO visualization. In addition, neutrophils and NETs were incubated with 200 ng/mL DAPI, for DNA visualization. NETs were imaged with an Olympus BX41 fluorescence microscope and with a Leica TCS SP5 confocal microscope, with a HC PL APO CS 63× oil lens and the LAS AF software. The number of cells that release NETs was counted, and the percentage of NET-releasing neutrophils was obtained from 5 representative optical fields.

The coagulation factors FXa and thrombin were tested at a range of concentrations of 25-50 nM and 0.2-8 U/mL, respectively. Even at the maximal concentration tested, FXa or thrombin did not induce substantial NETosis (Figure 1).

FIGURE 1. Effect of coagulation factors on the formation of NEts. The bar graph depicts NEtosis induced by 50 nM FXa and 8 U/mL thrombin. The above results represent the mean ± SD of at least 4 different neutrophil preparations. 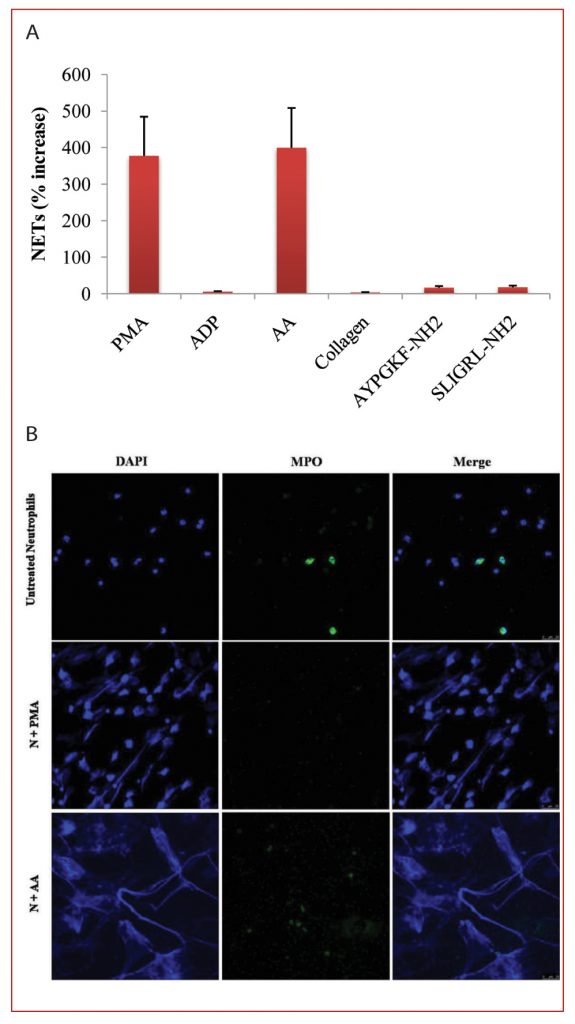 FIGURE 2. A. Effect of various agonists on the formation of NEts. The bar graph depicts NEtosis induced by 25 nM pMA, 100 μM ADp, 0.25 mM AA, 15 μg/mL collagen, 100 μM AYpGKF-NH2 and 100 μM SLIGrL-NH2. the above results represent the mean ± SD of at least 4 different neutrophil preparations. B. Representative confocal microscopy images of untreated neutrophils, as well as NEts from neutrophils treated with 25 nM pMA or 0.25 mM AA. Neutrophils and NEts were stained for myeloperoxidase (MpO) and DNA with DApI. Magnification 63×. Abbreviation: N; neutrophils.

We next evaluated whether activated platelets can induce NETosis. To activate platelets in situ, i.e. in the presence of neutrophils, we have chosen a platelet agonist, among those tested in the present study, that was inactive towards NETs production by neutrophils. Among these agonists we have chosen ADP since its platelet receptor P2Y12, is the main target of antiplatelet therapy used currently in the clinical practice.11 ADP cannot induce neutrophil activation and NETosis, since neutrophils do not express functional P2Y12 receptor.12 We first investigated whether the total suspension of platelets activated with ADP in an aggregometer could induce NETosis. As expected, ADP, at the concentration of 20 μM, induced a full platelet aggregatory response when added to the PRP in the aggregometer (Figure 3A). The total suspension of the ADP-activated PRP induced a significant NETosis when incubated with the neutrophil suspension for 3.5 h as compared with resting PRP (Figure 3B). Similarly, when the PRP was activated with ADP in situ, in the presence of neutrophils, it induced NETs production, which was not observed in the absence of ADP (Figure 3C). Representative confocal microscopy images of neutrophils in the presence of untreated PRP, as well as in the presence of PRP, either pre-activated in the aggregometer or activated in situ with ADP, are shown in Figure 3D. 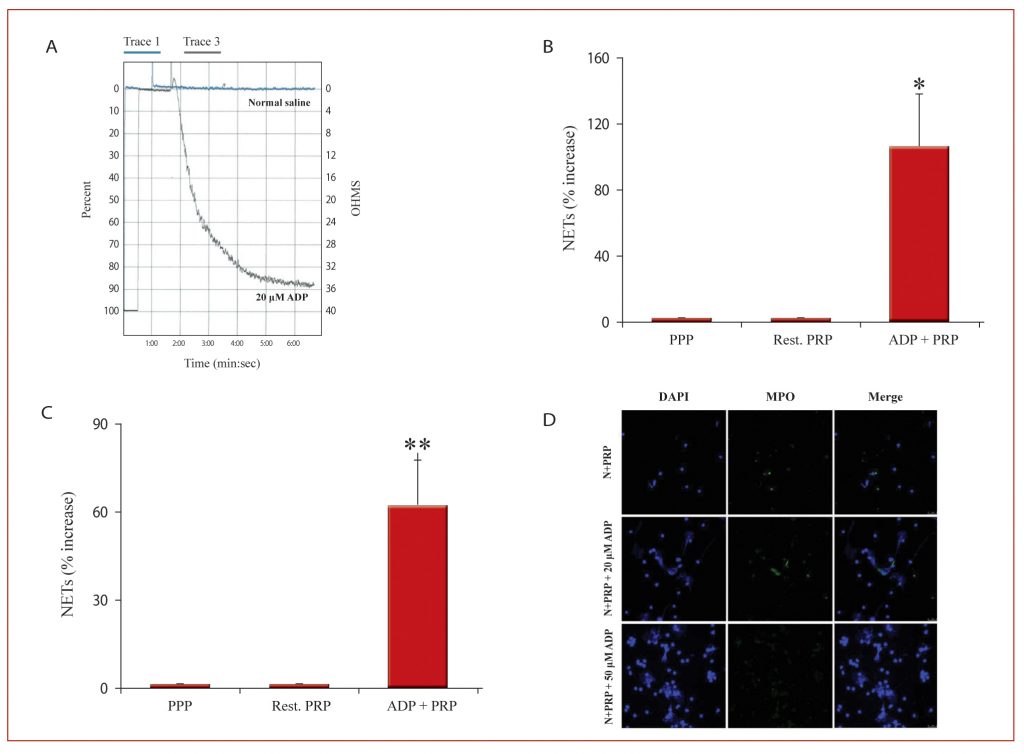 The present study demonstrates that the coagulation factors FXa and thrombin, as well as the platelet agonists ADP, collagen and PAR-4 agonist, do not induce NETs production. This is possibly due to the absence of the expression of their corresponding functional receptors on neutrophils, or due to the fact that these receptors may be linked to other neutrophil functions, such as chemotaxis, but not to NET formation.12-14 It has been suggested that PAR-2 is expressed in neutrophils.10 However, in the present study we showed that the PAR-2 activating peptide does not cause substantial NETosis. This could be possibly due to the fact that this receptor may be linked to other neutrophil functions but not to NET formation, or this receptor may be not functional in neutrophils.

By contrast the platelet agonist AA, induced robust NETosis, comparable in magnitude to PMA, the potent neutrophil activator and inducer of NETs production. In platelets, AA is physiologically hydrolyzed from the membrane bilayer phospholipids, or taken up by them when added in vitro, to form thromboxane A2 via the cyclooxygenase-1 pathway.15 In neutrophils, AA is metabolized via the lipoxygenase-1 pathway, which among other active metabolites, it leads to the formation of leukotriene B4,16 that could be the main metabolite responsible for the AA-induced NETosis.

An important observation of the present study is that in the presence of platelets, ADP can induce NETosis even though it is inactive when added directly to neutrophils. This finding is consistent with our observation that the suspension of platelets activated with ADP, also induces NETosis. These results suggest that activated platelets, through cell to cell interaction with neutrophils or by secreting mediators such as P-selectin or AA or by shedding platelet microparticles could potently induce the production of NETs.

In conclusion, the present study demonstrates that activated platelets induce NETs production thus providing an additional mechanism through which platelets contribute to various pathophysiological conditions in which NETs are implicated, such as inflammation and thrombosis. This new finding may be clinically significant in patients receiving antiplatelet therapy with the platelet P2Y12 antagonists clopidogrel or ticagrelor. The whole spectrum of platelet mediators that are implicated in NETosis needs to be further investigated.

The present research has been co-financed by the Operational Program “Human Resources Development, Education and Lifelong Learning” and is co-financed by the European Union (European Social Fund) and Greek national funds [grant number (MIS) 5006031].

The authors report no conflicts of interest.

Empagliflozin in mice fed on a fast-food diet: Preliminary biochemical data The role of epidemiology research in economic evaluation for Health Technology Assessment Type 1 diabetes mellitus and cardiovascular risk: A short review Health literacy in relation to health outcomes in hypertension: A systematic review A Collection of Position Statements and Opinions on e-cigarette use and cardiovascular disease: On behalf of the Working Group on Epidemiology of the Hellenic Atherosclerosis Society