Childhood obesity is recognized as a major public health problem in our century and has been described as a “global pandemic”.1 Childhood obesity has been associated with early development of dilation, endothelial and cardiovascular dysfunction and atherosclerosis.39 The prevalence of obesity has increased significantly over the last years, with the number of overweight/obese children and adolescents at the age group between 5 to 19 years old reaching 18% in 2016 in comparison to 4% in 1975, globally.2 According to the latest estimations from 2015-2017, countries of southern Europe are those with the highest prevalence of childhood obesity. Specifically, Cyprus, Greece, Italy, Malta, San Marino and Spain belong to the countries where approximately 20% of the boys are obese. On the other hand, Denmark, France, Ireland, Latvia and Norway belong to the countries with the lowest prevalence of childhood obesity, with less than 10% both for boys and girls.3 The GRECO study in Greece in 2010 underlined the alarming rates of obesity not only for boys but also for girls, with a percentage of 12.9% and 10.6%, respectively being obese.4

A recent determinant of breakfast suggests that “Breakfast is the first meal of the day that breaks the fast after the longest period of sleep and is consumed within 2 to 3 h of waking; it is comprised of food or beverage from at least one food group, and may be consumed at any location”.5 The importance of breakfast has been widely recognized, making it the most essential meal of the daily routine, since it has been associated with healthier behaviours, it may have a protective role against chronic diseases and increases the cognitive and school performance among children and adolescents.6 It has been estimated that breakfast provides approximately 20% of the daily energy intake10 and should consist of grain (especially whole grain), fruit or juice and food rich in calcium like (semi)-skimmed milk products.7 Despite the benefits of breakfast consumption more and more children tend to abstain from this healthy habit.8,14,15 Additionally, skipping breakfast has been associated with an increased risk of developing health problems, including cardiometabolic diseases and diabetes type 2.9

Thus, the purpose of the present narrative review paper was to examine existing data on the association between breakfast consumption and the development of obesity in children and adolescents.

Although this work is a narrative review, an attempt was made to search the literature with a more formal way. Thus, a literature search was held retrieving original articles from the scientific databases PubMed and Scopus. The time frame was the last decade, i.e., between 2008 to 2018, using as key words the following MeSH (Medical Subjects Headings) terms and keywords: “breakfast”, “diet patterns”, “skipping breakfast”, “breakfast benefits”, “children”, “adolescents”, “childhood overweight/obesity”, “prevalence of childhood obesity”, “trends of obesity”, “increased Body Mass Index (BMI) in children”. Articles written in English, whose primary or secondary objective was the association of breakfast consumption with childhood obesity, were included. Moreover, the selected studies referred to children and adolescents younger than 18 years old. The search retrieved 50 relevant papers, of which 23 were finally selected; from the 26 articles included in this review, 4 were prospective cohort studies, 15 cross-sectional studies, 3 cross-national studies, 2 school-based surveys, one pooled analysis and one systematic review.

A cross-sectional study in France identified four main dietary patterns. The study was conducted during 2010-2011 in 529 children 9-11 years old, and used dietary records from children and/or their parents about breakfast composition. In order to identify the most frequent dietary patterns, the breakfast items were classified into 15 solid and 15 liquid food categories, which were analysed by component. The most frequent pattern that was presented in the analysis was “Sweets Breakfast” which was consumed by 45.1% of the children with main components flavoured milk and sweets, especially brioche and chocolate spread, as well as water or juice. The “Traditional French Breakfast” including flavoured milk, bread, fat (especially butter) and juice was preferred by 27.2% of the participants. After that, the “Ready-To-Eat-Cereals (RTEC)+Milk Breakfast” which consisted of RTEC, milk and juice was consumed by 18.1% of the children, while another 9.5% chose the “Dairy and Juice Breakfast” that included mostly dairy products (whole milk/yogurt or yogurt drinks), sweets and tea or juice.10 Obviously, the majority of children prefer having for breakfast foods rich in energy and fats such as flavoured milk, sweets and fat in comparison to RTEC, milk and dairy products which are very rich in minerals and vitamins. This could probably be explained by the fact that the components of “Sweets Breakfast” and “Traditional French Breakfast” are tastier than the components of “RTEC+Milk Breakfast” and “Dairy and Juice Breakfast”, making those foods more preferable, although they lack micronutrients and are less nutritional.

Despite the benefits of breakfast consumption, there is a significant number of children and adolescents skipping breakfast.8,14,15 The Healthy Lifestyle in Europe by Nutrition in Adolescence (HELENA) Study, a cross-sectional study of 2.929 adolescents from 10 different European countries aimed to associate the frequency of eating breakfast with CVD risk factors. 54% of the adolescents were classified as “consumers”, 8% as “occasional consumers” and 38% as “skippers” based on their answer in the statement “I often skip breakfast”. 925 of the total sample participated in blood analyses and measurements. The results indicated that consuming breakfast regularly is associated with a better image of cardiorespiratory fitness in both sexes (p<0.001). Especially for males, not skipping breakfast seems to be associated with a healthier cardiovascular profile, while at the same time it has the ability to diminish the consequences of excess adiposity on total cholesterol (TC) and Low-Density Lipoprotein-Cholesterol (LDL-C) with an unknown mechanism (p<0.001).13 As it was recently documented, breakfast consumption on a regular basis is very important for having a healthy lifestyle with a great impact on cardiovascular, cardiorespiratory and cardiometabolic profiles among others,14,15 while the adverse effects of skipping breakfast may be obvious even after a very long time when adolescents become adults16 (Table 1).

The Non-Communicable Diseases Risk factor Collaboration (NCD-RisC) recently underlined the increasing prevalence of childhood obesity worldwide. According to a large pooled analysis conducted from 1975 to 2016, age-standarised prevalence of obesity increased both for boys and girls in all 200 participated countries. High-income countries appeared to have a relatively small increase of approximately 30-50% per decade, while the same number for countries of southern Africa is almost 8 times higher, reaching 400% per decade. The number of obese girls in 2016 was 10 times higher than in 1975 with a similar increase among boys, approximately 12 times higher compared to 1975.17 Those facts confirm the necessity of a new strategic plan to prevent the prevalence of obesity among all age groups.

Focusing on Europe, the Identification and prevention of Dietary- and lifestyle-induced health EFfects In Children and infantS (IDEFICS) study from 2007 to 2008 showed that the prevalence of obesity among the participant countries was as follows: Italy 20%, Cyprus 8.4%, Hungary 6.4% and Spain 6.2%. The countries with the lowest prevalence of obesity were Sweden (2.2%) and Belgium (2.3%).18,19 The difference in the prevalence of obesity among the countries reflects the differences in dietary and lifestyle patterns, with the first ones having adopted less healthy habits, such as less adherence to Mediterranean diet, decreased physical activity, sedentary lifestyle and increased time spent on television.20-22 The analysis of the data of the Health Behaviour in School-aged Children (HBSC) study indicated that in almost half of the European countries overweight and obesity frequency did not increase any further from 2002 to 2010.23 This observation is in agreement with the results of other studies showing a plateau in the development of obesity in the same study period.24 The reasons leading to this plateau have not been clear yet. A possible explanation could be that the strategies to prevent obesity over the years have been successful and this plateau is their result. Apart from that, this stabilization may reflect the need to reassess the definition of childhood obesity according to recent anthropometric measurements. Nevertheless, more studies are needed to clarify this situation.

Childhood obesity seems to be a very serious problem in Greece. A cross-sectional study from 2010 to 2011 in 124,113 children, was conducted in order to estimate the frequency of childhood and central obesity (Table 2). The analysis showed that 8.8% of the participants suffered from obesity, of which 95% also had central obesity.25 At the same period, the ADOlescent NUTrition (ADONUT) study assessed 37344 Greek adolescents indicating that in this age group the obesity rate was 7.5%, while 5.1% of them also had central obesity. Splitting the sample by sex, 8.9% of the boys were obese alongside with central obesity in 5.1% of them; while among girls the rates were 6.0% and 3.9%, respectively.26 The aforementioned results were also confirmed by a more recent study, the EYZHN programme including information about 336,014 Greek children and adolescents from a nationwide, school-based survey. The study showed that 9% of the boys were obese, with almost all of them (95%) having developed central obesity, while 7.5% of girls were obese with 93.5% of them having central obesity. Moreover, it was observed that as children entered puberty, the prevalence of obesity decreased.27 This information about the prevalence of obesity in Greece agrees with the results of other surveys,28,29 while the decreasing tendency while growing up is also confirmed by other researchers.28

The Healthy Growth Study, a cross-sectional study in Greece was conducted in order to identify lifestyle patterns and their association with obesity and fat mass in children. The sample consisted of 2073 children aged 9-13 years old. Anthropometric measurements and 3 different 24-hour recall morning interviews were conducted to collect information about dietary habits, physical activity levels. Body fat and visceral fat mass were assessed with a standarized activity interview and Bioelectrical Impedance Analysis (BIA) respectively. The Principal Component Analysis (PCA) came up with 5 different lifestyle components. Component 1 consisted of high consumption of dairy products and breakfast including fruit, cereals or dairy products and was found to be negatively associated with BMI and fat mass (p=0.07 and p=0.029 respectively). Moreover, children who reported having dietary habits close to those of component 1 seemed to be less likely to become overweight or obese (OR=0.64, 95% CI: 0.46, 0.79). Component 2 included higher consumption of high-fibre foods, component 3 consisted of more screen time, less sleep time and higher consumption of sugared beverages, component 4 included more time spent on moderate-to-vigorous physical activity (MVPA) and more frequent meals and component 5 consisted of higher consumption of red meat and lower consumption of fish. Among them, only component 4 was also found to be negatively associated with BMI and fat mass (p=0.024 and p<0.001 respectively), since the results of the analysis of the other components did not indicate statistically significant associations.34 The results indicating that patterns including regular breakfast consumption are associated with lower risk of becoming overweight or obese are confirmed by other researchers too. This suggests that breakfast consumption may have a protective role against obesity, underlying the importance of breakfast in daily routine of children35-38 (Table 3, Figures 1, 2). 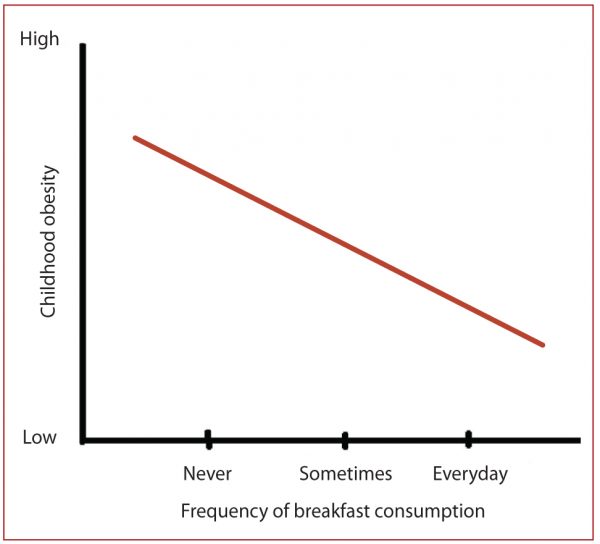 Figure 1. The number of children with childhood obesity was associated with the frequency of breakfast consumption. 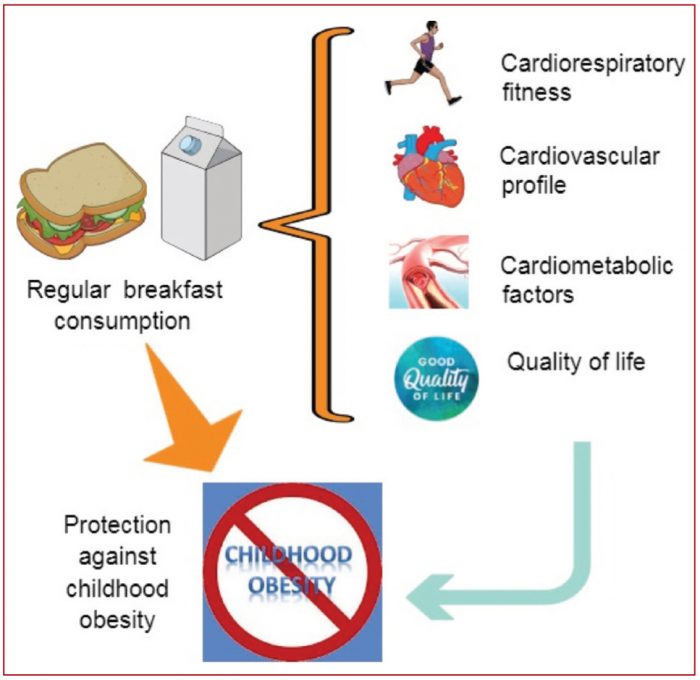 It is obvious that breakfast consumption is associated with the development of obesity among children and adolescents. The present review included the most recent studies about breakfast and its relation to body weight, indicating that skipping breakfast is a behaviour that is often met among obese children. In conclusion, public health professionals should implement effective intervention programs to motivate children and adolescents to consume breakfast on a daily basis. Parents and teachers should provide and support healthy environments so as children to develop healthy lifestyle habits.

The authors declare that there is no conflict of interest.

Empagliflozin in mice fed on a fast-food diet: Preliminary biochemical data The role of epidemiology research in economic evaluation for Health Technology Assessment Type 1 diabetes mellitus and cardiovascular risk: A short review Health literacy in relation to health outcomes in hypertension: A systematic review A Collection of Position Statements and Opinions on e-cigarette use and cardiovascular disease: On behalf of the Working Group on Epidemiology of the Hellenic Atherosclerosis Society